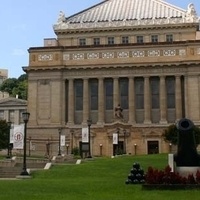 Soldiers & Sailors Memorial Hall & Museum commemorates the men and women from Allegheny County who have served in every U.S. war since the Civil War. Styled after the ancient mausoleum of Halicarnassus, one of the Seven Wonders of the Ancient World, Soldiers & Sailors is the largest memorial in the United States dedicated to America’s military personnel.

Designed by architect Henry Hornbostel and dedicated in 1910, the building houses a museum featuring rare and one-of-a-kind exhibits as well as a 2,500-seat auditorium, a banquet hall, and meeting rooms. Many Pitt functions are held at Soldiers & Sailors. An expansive front lawn sits on top of an underground parking garage that's operated under a long-term lease by the University.

Silence of the Lambs Screening |