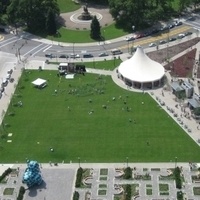 The University assisted the Pittsburgh Parks Conservancy with construction management services for the revitalization of Schenley Plaza, located across Fifth Avenue from the Cathedral of Learning. Originally designed as a grand entrance to Schenley Park, the plaza was converted to a surface parking lot in 1949—a move that Terence Smith, Pitt's Andrew W. Mellon Professor of Contemporary Art History and Theory, described in 2002 as "an absolute aesthetic disaster" and akin to "filling the Grand Canyon with a shopping mall."

In the 1990s, the Parks Conservancy began a 10-year planning process to restore the plaza to its former glory. The revitalization was completed in 2006, providing Pitt and the surrounding community with an acre of new green space complete with outdoor movable seating, a tented area for shade, ornamental gardens, food kiosks, free wireless service, and a Victorian-style carousel.  A full service restaurant, The Porch, is a recent addition.

The renovation project received the Silver Award for Environmentally Sustainable Projects from the International Awards for Livable Communities (2009) and the plaza itself earned a  “Best Place to Hang Out” designation from The Pitt News (2008).

Visit us at the mini pow wow! |

Wit(h)ness: An Evening with Elizabeth Acevedo |