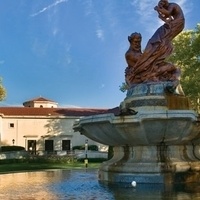 Modeled after a Roman villa owned by Pope Julius III (1487-1555), Frick Fine Arts houses classrooms, art galleries, an open cloister, and one of the nation’s top fine arts libraries. The building’s treasures include reproductions of 15th-century Florentine Renaissance artworks by Russian artist Nicholas Lochoff. In 1911, Lochoff was commissioned by the Moscow Museum of Fine Arts to travel to Italy and make a series of copies of the finest examples of Renaissance art. Those copies, considered by some to be the finest replicas of the original works, were acquired by Pitt and placed in Frick Fine Arts.

The fountain outside the building was designed by Victor Brenner, the same artist who sculpted the portrait of Abraham Lincoln on the U.S. penny.

What’s in a Name?: Legal Names and the LGBTQIA+ Experience with Rosalynne Montoya |