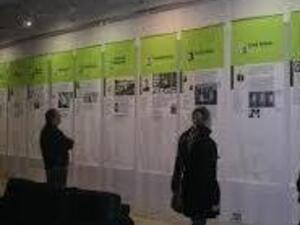 Names Instead of Numbers

The international traveling exhibit, "Names Instead of Numbers: Remembrance Book for the Prisoners of Dachau Concentration Camp" is being hosted by the German Department.

Nijmegen, Bordeaux, Vienna, Lublin, Zaporizhia, Berlin – these are a few of the thousands of places in Europe, large and small, from which people were deported to Dachau Concentration Camp between 1933 – 1945.

The International Traveling Exhibition “Names Instead of Numbers” shows a selection of biographies from the Dachau Remembrance Book, in which the individual life stories of former prisoners are described, as well as background information about the Remembrance Book project and the history of the Dachau Concentration Camp.

The exhibit is free and open to the public.

More information on the Remembrance Book Project can be found on the exhibit website.

An reception to mark the opening of the exhibition will be an Monday, February 25 from 4-6 p.m. in Posvar Hall.

Displaying this exhibit is made possible by the German Department, the Dietrich School of Arts and Sciences, the Jewish Studies Program, and the European Studies Center at the University of Pittsburgh.