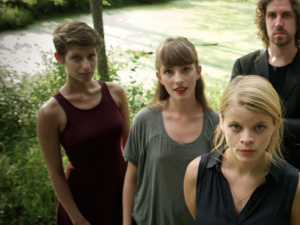 music on the edge, Graduate Composers

Music on the Edge: TAK Ensemble

UPDATE: The location of this event has been changed to Bellefield Hall Auditoriurm

Music on the Edge presents TAK ensemble, an energetic and virtuosic contemporary ensemble, performing works by graduate student composers at Bellfield Hall on January 25th. Featured composers include: Nicolas Aguia, Ramin Akhavijou, Mark Micchelli, Cullyn Murphy, Devon Tipp, and Emerson Voss. All of the composers will be present and happy to engage with the audience. This concert is free and open to the public.

TAK “impresses with the organicity of their sound, their dynamism and virtuosity — and, well, just a dash of IDGAF as they slay the thorniest material like it’s nothing” (WQXR, Q2 Music). Dedicated to the commissioning of new works and direct collaboration with composers and other artists, TAK promotes ambitious programming at the highest level, fostering engagement both within the contemporary music community and the artistic community at large. Their debut album “Ecstatic Music: TAK plays Taylor Brook” was released by New Focus Recordings in September 2016, to critical acclaim; it was featured as Q2 Music’s Album of the Week by WQXR, and was listed in the Top 10 Classical Albums of 2016 by The Boston Globe, which praised the “young, fearless players… fluid grace and confidence.”

Recent engagements include a multi-week run of “The Power of Emotion” with TELE-violet Theater at Abrons Art Center; a collaborative commissioning project with Montreal-based percussion quartet, Architek; the release of TAK’s second album Sanctuary with Mario Diaz de Leon on Denovali Records which was recommended by the New York Times and I Care If You Listen; a premiere performance of “21st Century Sound Stories,” an evening of contemporary music and theater by Qubit and director Josh Gelb; and working with institutions such as Columbia University, New York University, The new York Philharmonic Very Young Composers, and the Juilliard Music Advancement Program.

Please let us know if you require an accommodation in order to participate in this event. Accommodations may include live captioning, ASL interpreters, and/or captioned media and accessible documents from recorded events.