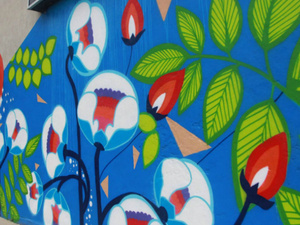 Institutional Colors in my Neighborhood: The Challenge of Graffiti Art

This event is a public lecture about graffiti art's role in Chicago communities. The lecture will be given by Gloria Talamantes, also known as GLOE, a graffiti artist, educator, neighborhood journalist, and the creator of Brown Walls Project in Chicago, a city-wide public art initiative to beautify neighborhoods plagued by brown buff walls from Chicago's graffiti blasters program. Talamantes will lecture on the role of graffiti artists in challenging how gentrification and development transform a city and its neighborhoods. The following is a summary of the talk:

The brown buff paint in Chicago is a sign of trauma. Chicago's graffiti blasters program is a task force strategy to erase graffiti (voices) that rebel in part due to the conditions brought by systematic disinvestment in predominantly Black and Brown inner-city neighborhoods. For more than a decade, it has served as a model for cities worldwide. In the early 2000s, the Brown Wall Project was formed on the West Side of Chicago to bring awareness and challenge the dominant narrative of graffiti. As gentrification runs rampant across the globe, in cities like Chicago, we gray out the expectations for justice. Developments get whitewashed in gray. Graffiti artists are then scouted to paint murals to try and make the transformation less damaging. Through graffiti art intervention, we will explore, interact and challenge the systems in place that are rooted in discriminatory practices