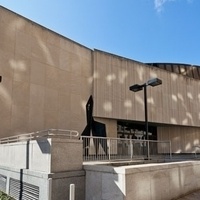 Lawrence Hall houses classrooms and lecture halls for courses in disciplines across the arts and sciences. The building's 998-seat auditorium is the largest lecture hall on campus. A 24-hour computer lab, one of the University's most popular, also is in Lawrence Hall.

Completed in 1968, the building was named for David L. Lawrence, a Pitt trustee from 1945 to 1966 who was also Governor of Pennsylvania (from 1959 to 1963) and Pittsburgh’s mayor from 1946 to 1959 during the city’s Renaissance I urban-renewal program. In front of the hall stands the sculpture Ode to Space by Pitt's Virgil Cantini (1919-2009), a memorial to Pitt Chancellor Edward Litchfield, who died in a 1965 plane crash.