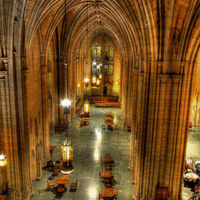 Fifty-two feet (four stories) high and almost a half-acre, the Cathedral of Learning's Commons Room is a Gothic-style hall that offers a unique setting for study, contemplation, and celebration. This room is a piece of true Gothic architecture; no steel supports were used in the construction of its arches.

Joseph Gattoni designed the stonework. The walls are made of Indiana limestone and the floor is green Vermont slate. The wrought iron in the room, including railings, lanterns, and an imposing gate, were designed by master ironworker Samuel Yellin; inscribed on the gate is a verse from Robert Bridges' "Ode to Eaton College": "Here is eternal spring; for you the very stars of heaven are new."

Students looking for help with calculus, chemistry, psychology, and other subjects get assistance from faculty members and grad students who volunteer at desks scattered around the Commons Room. Wireless Internet is available, but despite such technological upgrades the room retains the timeless quality described by Margaret Storm Jamerson, an English novelist who served as a visiting professor at Pitt in the late 1940s:

"To look down into the great hall called the Commons Room when it is filled with students sitting about reading, arguing, drinking coffee, is to be reminded—distantly, but without any sense of incongruity—of a medieval refectory or chapter-house."

The Commons Room occasionally hosts dinners, receptions, and other special events. Among the guests who have addressed Commons Room gatherings in recent years is Russian Federation President Dmitry Medvedev (in 2009). Nobel Peace Prize recipient and Pitt alumnus Wangari Maathai (2006) attended a reception in the room after speaking in Alumni Hall.

In 1957, innoculation teams set up in the Commons Room gave free injections of the new polio vaccine created by a team led by Pitt's Jonas Salk. (Pittsburgh was the first major city in the United States to rid itself of polio.) During 1943, the room—like much of the rest of the Cathedral—served as an installation for U.S. military personnel.

A time capsule in the Commons Room's cornerstone was a gift from the 1937 graduating class (Pitt’s 150th year) and contains documents meant to last 500 years. Included are signatures of the graduating class and faculty, a copy of the 1937 yearbook (The Owl), an edition of the Pitt News, the names of the building’s major donors and craftsmen, and a plate commemorating the original 17 nationality rooms. This statement is also included: “The Cathedral of Learning expresses for Pittsburgh a desire to live honestly in a world where kindness and the happiness of creating are life.”