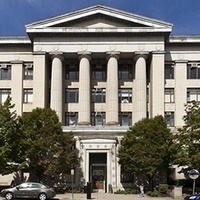 A Pittsburgh History and Landmarks Foundation Historic Landmark, Allen Hall houses Pitt’s Department of Physics and Astronomy. Since the days of founding chair Samuel Langley, who pioneered heavier-than-air flight, the department has boasted a proud history of innovative research and teaching. During the 1990s, for example, current department chair David Turnshek discovered the farthest known galaxy from Earth.

The Greek Revival-style Allen Hall was dedicated in 1915. Its facade includes a plaque honoring Polish scientist Marie Curie, who conducted research at Pitt and upon whom the University conferred an honorary doctor of laws degree in 1921. The plaque commemorates the 100th anniversary in 1967 of Curie’s birth; it was unveiled by fellow Pole Karol Wojtyla, then the Archbishop of Krakow, who in 1978 became Pope John Paul II.

Doctoral Candidate, Ava Myers is defending a dissertation titled, " Probing the dark sector with the Higgs boson and missing energy at the LHC” on Friday,...